As you may know, last year I completed AP Physics I and II. But that doesn't really mean much. The real question is, did I learn anything?

There's a couple ways to find out, but a rigid body simulator had been on my mind for a long time, and hey, why not?

Each object is a collection of points connected by massless beams. The size of the dot is indicative of the mass of each point. Each object is assigned a velocity and angular velocity:

This snippet creates a block with arbitrarily large mass â€“ used as a border.

Finding the center of mass and moment of inertia is easy enough if we treat an object as a collection of point masses:

From there we can simulate undisturbed motion as a combination of rotation and translation, with rotation occuring around the center of mass.

Why is the center of mass the axis of rotation? Take a look: 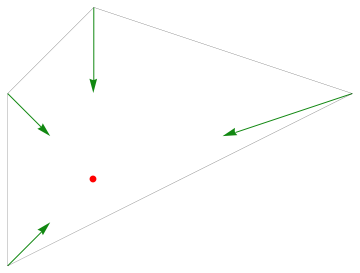 Cool! So now we have some rotating and moving objects:

Forces were one of the easier implementations, outside the collision ordeal, of course. Outside forces affect motion as per Newton's 2nd law: \[F=ma\] It is easy to merely say this, but in practice, in the discrete world of computers, it is a little more difficult. Even with window.requestAnimationFrame(), the time between frames is not garunteed.

The only example currently implemented is gravity, though electric and magnetic influence would be cool next step. It does allow arbitrary directions of gravity though:

Collisions were a little difficult. So difficult that I am not ashamed to say that I consulted Chris Hecker's awesome article for guidance.

But there were many other challenges besides collision response. How do you identify a collision? How do you prevent objects from passing through each other? How do you get a pile of squares to behave themselves, each with the square above pushing down on it and the square below pushing up? 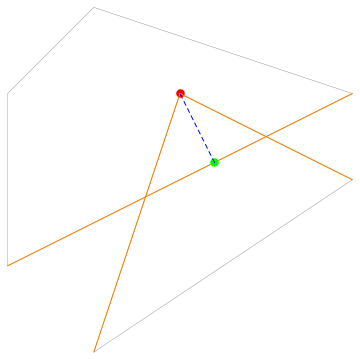 The orange lines are all intersecting lines, the red point the intersecting point and the green point the collision point (assuming that the objects had not already passed through each other).

I then translated the offending object so that it was not intersecting the other polygon. Although this has the downside of creating a jerky look, it prevents objects that are smashed in a corner from passing through a wall.

In a continued effort to avoid objects passing through other objects, I tried something new. When an object has been involved in a collision in the current frame, the translation vector is projected onto a vector perpendicular to the vector from the center of mass to the collision:

So there you have it. My own, homegrown rigid body simulation. Here's the completed (for now) project:


It definately has some major glitches. I think some predictive collision algorithms may be in order, but that it for another time.