That was all well and good, but I really wanted a geometric, intuitive grasp of what the dot product was all about. Normally I wouldn't be so concerned (the factorial function hardly has an easy geometric interpretation), but the dot product had a mysterious habit of showing up in a heavily suggestive manner.

For example, in my Physics book there was a diagram that looked like this: 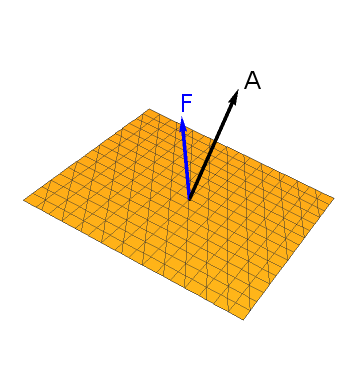 When calculating the flux through this small section, they had a vector normal to the plane called \(\vec{A}\). The magnitude of this vector was equal to the area of the plane chunk. That was peculiar. Why would they do that? They continued. The flux, they said, was equal to magnitude of the "area vector" times the component of the field vector in the direction of \(\vec{A}\), or \(||\vec{F}||\,\cos{\theta}\). In other words, \[\phi=\vec{A}\cdot\vec{F}\]

What?!? Where'd that dot product come from? They must have planned that. Why else would they make that weird \(\vec{A}\) vector? They had something that I did not, and I felt tricked. They knew all along that the dot product was coming and they didn't feel like enlightening me.

After a little thinking I finally put the retrospectively obvious together.

What I Wish I Had Known About the Dot Product

But I think the distinction, although trivial, is worth noting. In my precalculus mind, the presence of \(\cos{\theta}\) indicated that I needed the angle between vectors for the dot product to have some sort of meaningful geometric interpretation. Only then could I construct the triangle above and see the geometry. But even then I was seeing the relationship from a trigonometric view â€“ an extra step in my thinking that hampered a quick and easy way of "seeing" the dot product. 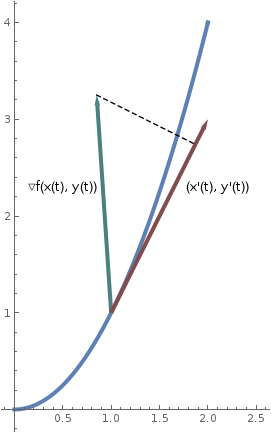 Encoded in the gradient is a convenient description of the local nature of our function \(f\). Because \(\nabla f\) is an indication of the magnitude and direction of the greatest increase of the function (and the function is locally planar), the component of \(\nabla f\) in the direction of the parameterization will give how much of that increase is realized in the parameterized line. Multiply that by the "speed" of the line, \(((x'(t),y'(t))\), and suddenly you have the increase of \(f(x(t),y(t))\) at that point. Aha! \(\nabla f\) projected onto our tangent vector times the magnitude of the tangent vector. Dot product!

The key, at least in my mind, is "the component in the direction of...." Instead of seeing some formula that magically arises in loads of applications throughout physics and math, the dot product does have a geometric interpretation.

The dot product is fundamentally a measure of projection.

If I had known this two years ago, I would have saved myself much anxiety.